Why Don't We Have Politicians Like Grover Cleveland Anymore?

This is what I want to hear from the president.  From a statement made by Grover Cleveland when he vetoed a bailout for Texas farmers suffering from a drought.  The fact that no president from either party would consider making such a statement on principle anymore illustrates just what went wrong with the USA.

To the House of Representatives:
I return without my approval House bill number 10203, entitled “An Act to enable the Commissioner of Agriculture to make a special distribution of seeds in drought-stricken counties of Texas, and making an appropriation therefor.”It is represented that a long-continued and extensive drought has existed in certain portions of the State of Texas, resulting in a failure of crops and consequent distress and destitution.
Though there has been some difference in statements concerning the extent of the people’s needs in the localities thus affected, there seems to be no doubt that there has existed a condition calling for relief; and I am willing to believe that, notwithstanding the aid already furnished, a donation of seed grain to the farmers located in this region, to enable them to put in new crops, would serve to avert a continuance or return of an unfortunate blight.
And yet I feel obliged to withhold my approval of the plan as proposed by this bill, to indulge a benevolent and charitable sentiment through the appropriation of public funds for that purpose.
I can find no warrant for such an appropriation in the Constitution, and I do not believe that the power and duty of the general government ought to be extended to the relief of individual suffering which is in no manner properly related to the public service or benefit. A prevalent tendency to disregard the limited mission of this power and duty should, I think, be steadfastly resisted, to the end that the lesson should be constantly enforced that, though the people support the government, the government should not support the people.
The friendliness and charity of our countrymen can always be relied upon to relieve their fellow citizens in misfortune. This has been repeatedly and quite lately demonstrated. Federal aid in such cases encourages the expectation of paternal care on the part of the government and weakens the sturdiness of our national character, while it prevents the indulgence among our people of that kindly sentiment and conduct which strengthens the bonds of a common brotherhood.
It is within my personal knowledge that individual aid has, to some extent, already been extended to the sufferers mentioned in this bill. The failure of the proposed appropriation of $10,000 additional, to meet their remaining wants, will not necessarily result in continued distress if the emergency is fully made known to the people of the country.
It is here suggested that the Commissioner of Agriculture is annually directed to expend a large sum of money for the purchase, propagation, and distribution of seeds and other things of this description, two-thirds of which are, upon the request of senators, representatives, and delegates in Congress, supplied to them for distribution among their constituents.
The appropriation of the current year for this purpose is $100,000, and it will probably be no less in the appropriation for the ensuing year. I understand that a large quantity of grain is furnished for such distribution, and it is supposed that this free apportionment among their neighbors is a privilege which may be waived by our senators and representatives.
If sufficient of them should request the Commissioner of Agriculture to send their shares of the grain thus allowed them, to the suffering farmers of Texas, they might be enabled to sow their crops; the constituents, for whom in theory this grain is intended, could well bear the temporary deprivation, and the donors would experience the satisfaction attending deeds of charity.

Now, I'm not one of these people who make the Constitution an almost sacred thing.  I'm much more interested in liberty in general than adherence to any particular law.  But there is a lot to like in the constitution.  Trouble is that now our fine representatives and executive seem more concerned with what they can get away with and how they can interpret away the limitations that were placed on the government by the constitution. The courts still technically have a role in making sure laws are constitutional, but they have dropped the ball in a number of very important areas as well.  I'd like to see all branches of government take their oaths to uphold and defend the Constitution seriously.  Not because the constitution is sacred or perfect, but because it is a hell of a lot better than a completely unfettered government with unlimited power.  And if you ignore the essential limits on what the federal government has the power to do that are in there, you are practically there.  It's just a matter of time.
Posted by Zeb at 4:43 PM No comments: 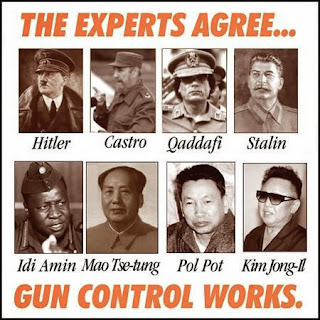 Guess who said this:


And why do I regard the British rule as a curse?…[B]y the policy of disarmament, it has degraded us spiritually. Lack­ing inward strength, we have been reduced, by all but universal dis­armament, to a state bordering on cowardly helplessness.


See after the break.